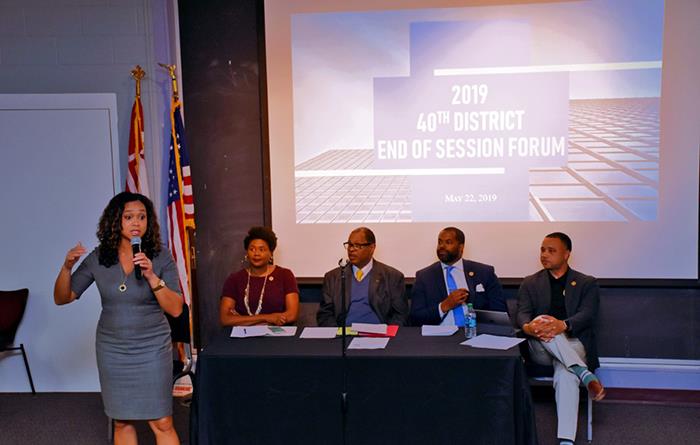 Senator Hayes, a freshman senator, highlighted his work with the Senate Finance Committee, which oversees areas of legislation in health care facilities, transportation, utility regulations, banking and other financial institutions, and State personnel.

Hayes, who also chairs the six-member Baltimore City Senate Delegation, sponsored and co-sponsored 126 bills during the 90-day legislative session. Among the key bills he sponsored were a bill to limit the sale of loose cigarettes and a bill to ensure transparency and fairness in health insurance. He also sponsored legislation making it easier for craft breweries to do business and helped acquire more than $51 million in budget initiatives for institutions in the 40th District, including $874,000 for BCCC’s Loop Road project.

Delegate Nick Mosby spoke about his work with the House Ways and Means Committee and his efforts to increase high-quality education, reduce crime and help make Baltimore a safe and prosperous city.

Mosby’s legislative highlights include a bill to increase the minimum wage to $15 by 2025, his Ban the Box bill, which prohibits disclosures of a job applicant’s criminal history prior to an in-person interview and budget initiatives including support for Lexington, Hollins and Avenue Markets, WYPR, and the Maryland Zoo.

Delegate Frank Conaway, Jr. spoke about his work with the Judiciary Committee and the work his committee has done with police reform and criminal justice reform including legislation to support tighter gun control.